Pick an NPC to frame the main encounter around. Then grab all the dice except a d20 and throw them.

Here’s a couple to get started with. 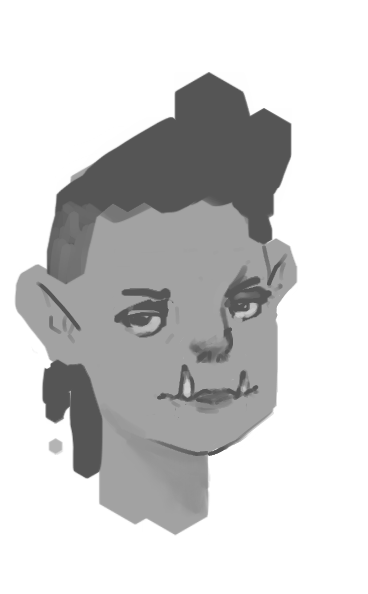 
It’s all the same to the orc called Kel Strak Kel. Sektorbrav, Corespenio, Porlili, even Cradoon. She’s been there and it’s all the same. This she’ll insist to any of the sloggers her contract’s winged her with, once she’s pulled enough rum out of her flask.
A sixleg Kano-kako charging you down, she’ll tell you, puffing blue smoke into your face, has jack shit on a line of Corespenian cavalrymen.  Hell, when I was at Billefuer and they broke through the pike line…


HD 3, HP 14
AC as chain, with the biggest shield your system’s got. Big enough to grant her partial cover.
Attacks

Silt and shale curling and swooping like you’re trekking across the exposed brain of some banded godhead. The Hellestrathe Badlands hiss and sigh under heavy boots, burping little carbon clouds as they slowly digest the tiny dead fossiliferous things crushed beneath the sediment.

The ancient volcano (Gryle, it’s called) that killed these things was (is) evil, and it trapped their ghosts here, too. They are its minions. Most of them are microscopic, and impossible to see during the day, but at night the will-o-wisp ostracodes and trilobytes and bryozoa filter through the air, faint and guttering like a starfield on the Earth.

Don’t eat the grass here, and don’t smoke it either, no matter how good the tingling feels. Not without a companion or a good tether to tie you down at night. Or you’ll rise and sleepwalk in the train of the dancing lights as they obey their orogenic idiot-god, and lead you into one of Gryle’s calderas. Gryle sleeps for now and eats for ever.


d12 Hellestrathe weather and time of day (if needed)